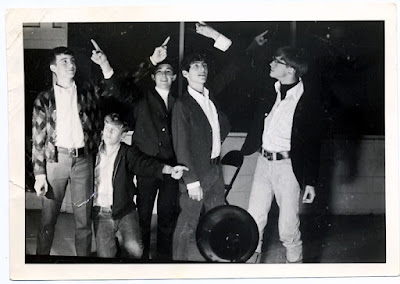 Jr. High School was plain weird and dangerous all around.  Home room.  Band.  Gym.  These were classes.  In band, we learned to read music and play the Flutophone.  When we finally got around to playing real instruments, I chose the drums.  That was, in hindsight, a mistake.  The drummer doesn't get a lot of attention in band.  My biggest thrill was getting to play the timpani, but that wasn't very often.  Over the course of the year, my musical skills didn't advance much.  But I sure had a lot of time to get into trouble.  The band director didn't like me, but I didn't like him back, so it was a pretty even trade.  We ignored one another as much as possible.

Gym class was the real shocker.  After a lifetime of keeping our peckers out of site, we were dumped into a large locker room where we were supposed to change clothes and shower with all the other boys in big open gang showers.  All the grades were combined, so there were large discrepancies in what we deemed our manhood.  On the first day, one of the younger kids got a boner.  That was it for him.  That's all everyone talked about around the school.  He was labelled a queer, and that was that.  Poor fucker.  It could have happened to any of us.  Thank god. . . .

Gym was where you learned that horsey looking redheads, the ones with the straw-like hair and thick lips, had giant members.  Those guys never bothered to wrap a towel around them as they paraded about.  It wasn't long until most of the guys quit taking showers before going to the next class.  They would just change back into their street clothes, sweaty or not.  It also wasn't long, either, before the hoodlums started smoking cigarettes behind trees in the woods surrounding the playing fields.  If you forgot your gym clothes, you didn't even have to dress out, so there was always a large group just wandering around.

The most spectacular thing, though, came from one of the coolest hoods in school.  Benny was good looking tough guy who was like a movie idol for the girls.  He was two grades ahead of me, but my locker was near his.  One day, Benny took off his pants and everyone froze.  He was wearing silky girl's panties.  Nobody said anything for a minute, and when Benny turned around, he said simply. . . . "These are Cindy's."  Cindy was his girlfriend, and then we got it.  Benny was cooler than ice water.  The locker room reverberated with approving hoots and hollers.

One day it got around that Benny was going to fight Sammy, another school tough.  It was over a girl, of course.  After class, everyone hurried down to the field behind the shopping center to see this epic battle.  They were the size of grown men, and when they hit, you could hear the thwack of bone.  Benny hit Sammy, Sammy hit Benny.  The whole thing was pretty even.  Then Sammy tackled Benny and they went to the dirt rolling around in the Sandspur patch where they had landed.  This went on for a few minutes, and then by mutual agreement, the fight ended.  Nobody had won, but nobody had lost, either.  The crowd broke up knowing they had watched something classic.

The fighting never seemed to end.  After our band won the school Talent Show by the old applause meter, a fellow--yet again older than I--took to calling me names when he saw me in the hallway.  He didn't like the whole Beatle thing.  He didn't like my hair.  He was taller and thicker than I by quite a bit, but he looked like an idiot.  One day, he was standing with a bunch of guys and he began mocking me yet again, so I walked up to the group.  I would fight him after school, I said.  I met him in the street close to his house.  He was there with his buddies.  We squared off, and I began throwing jabs that connected over and over again.  His face was red and already bruised looking, but I was getting tired, and dancing around in Beatle boots wasn't easy.  Suddenly, he clocked me with a right to the eye and staggered me.  I started backing up and he charged in swinging.  I kept backing up avoiding the punches.  I was practically running.  When it looked like he was getting tired, I stepped up and popped him with jabs a few more times.  We'd both run out of steam, though, and we each dropped our hands marking the end of the fight.

By the time I got home, I had a black eye.

"What happened," my father asked me.  It was Friday and we were going to Morrisons Cafeteria which was always a special treat.

I showed up at school Monday with that shiner.  The other kid didn't show up for a few days.  I had peppered him pretty good, I guess, and his faced was all bruised up.  When he did come back to school, he said he wanted to fight again.  He'd hit me pretty hard, and I knew he would do it again.  There was a good chance he'd win.  "Sure," I said,  but I didn't want to.  After that, though, he kind of faded into the background and didn't bother me at all.

Someone made a "slam book," a notebook with some heading written on the top of each page.  "Favorite Song." "Best Couple."  "Cutest Boy."  "Prettiest Girl."  And then there were people's names.  The book was passed hand to hand around the school, everyone writing anonymous comments.  It was our form of social media, and it could be devastating.

There were plenty of girls who liked me.  There were plenty of boys who didn't.  The school was becoming more visibly stratified all the time, the cool kids, the greasers, the mods. . . .  Things just kept getting weirder.  More and more, I just wanted to be alone and read books.