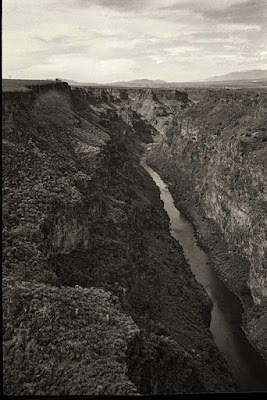 Film, obviously.  I'll stand by this picture.  Just a few miles to the north in Durango, the EPA has spilled more toxins into the river ways than any miner has ever thought of spilling.  I'm afraid we are doomed.  Republicans will seize upon the irreversibly horrible incompetence of this accident to eviscerate this evil arm of the Obama administration.  Bring back James Watt.  If you don't know of him, you can read here.  He was the Republican Party's Eco Boy.  He believed we lived in End Times and there was no saving anything.  I believe so, too.

I'm not sure that Charles Bukowski ever had a book reviewed in the New York Times, but now that he has been dead long enough. . . .  There is a review today.  This is surely just another sign.

My own days are a complex mixture of things.  All of them keep me from making photographs.

After discovering the Lillet, though. . . I've been drinking it aplenty.  Following a long morning's walk, I began.  Then a breakfast at a greasy spoon diner that has had a lot of the grease removed to appeal to the tastes of the moneyed hipster crowd.  I snuck a few pictures with my old Olympus A clamshell film camera.  I don't know how they will turn out, but it is the best, most stealthy camera ever made and I will not go anywhere without it again (especially now that I've spent thousands of dollars on a new camera).   And after breakfast, a trip to The Mall where we bought various things for the house and the body.  Candles and lotions, but also some clothes.  On Ili's insistence, I went to Brooks Brothers.  I didn't want to go because their clothes are not cut for someone with my build.  You must be tall and imperially slim to wear their clothes, and I always feel like the working class when I go.  Besides, I've always considered Brooks Brothers as the place where upper class parents take their children in the last days of summer to buy them fall clothing before they go away to prep school.  It is that and, of course, where aspiring young men go to buy their suits for their first professional job.  As they become more successful, of course, they will get their suits from Louis Boston or bespoke from Hickey-Freeman.

That is my romantic conception of it, anyway.

But I was looking for shorts, plaid, madras, and seersucker.  You might think these are easy things to find, but even Ralph Lauren is making the tight, cut-off, knee length hipster shorts that are only to be worn with little hats and facial hair.  I don't object, but I have thick (dare I say "muscular") legs and I am not comfortable in anything that constrains me.

I know you are already disparaging me for my bourgeois tastes.  I don't care.  You can jump up my ass.  You know who you are.

I do enjoy Brooks Brothers on a number of levels, though.  It speaks to some desire in me to have lived a different life, to have been the bohemian son of rich parents, able to travel the world in his youth and to mingle with the greatest artists and writers and thinkers of his time.  I would have enjoyed the dark wood paneled rooms and the rich leather chairs and the cut crystal whiskey glasses and the sleek sailing yachts and the expensive clothes.  Rather. . . .

Ili was right.  I got what I wanted and more.  She took me because all summer clothes were half price and she had another $20 off coupon.  She is a sweet and clever girl.

And trust me, I can make those shorts look cool.

In the morning, I had declared that I would make a seafood stew, a bouillabaisse if you will, so as the afternoon heated up, I had to rush to do the marketing.  I hadn't made a fish stew for twenty years or more, but I remembered that I had done it well then.  Suddenly, though, I felt I had no idea what I was doing.  Cod.  Shrimp.  Scallops.  Carrots.  Potatoes.  Onions.  Celery.  Tomatoes.  Herbs and spices.  Fortunately, Ili had frozen the leftover stock from the last time I made a pressure cooker chicken.  It was the perfect base.  I gave up on recipes and followed my instincts.  My instincts were good.  My mother and a friend came to dinner for light Lillet cocktails, delicious sourdough bread, and a hearty stew with treasures from the sea, followed by eighteen year old peaty scotch served in cut crystal glasses.

This is the way I am spending the Last Days.

But I must get out and record them, too.  Q is making me look silly right now.  He, who has been bound and stifled by the constraints of marriage, is now the one who is traveling and rediscovering the delights of living free.  The writing is lively and clever.

But I have this photograph today and it is a good one shot with film of the mighty Rio Grande.  It is damned pretty, I say.  Damned pretty.